V-moda is a manufacturer of some expensive headphones. Vibe II is an evolution to their older models that have been criticized for their durability. 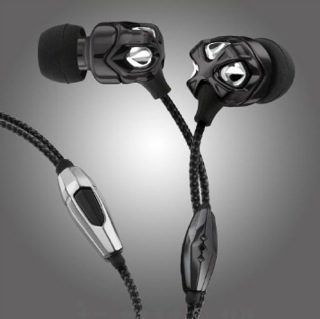 I have been using these headphones for a few days now. The most important factor for me, the build quality, seems good. Not insane, like with the iPhone, but enough to make you trust that they will last more than a few weeks. Being an extensive user of headphones and having broken so many pairs of “cheap” Sony headphones I was willing to pay a little bit more. Time will tell if it was worth it.

The V-moda Vibe IIs are in-ear headphones and thus make some cord noise when you move. Using the supplied “earhooks” (click to the fourth image of the Flash slide show to see a picture) this noise can be noticeably reduced thou not completely removed. V-moda claims that the headphones have some kind of noise-isolating technology. I have no idea how that works or if it is just marketing talk, but they seem to block outside noises efficiently. There is little or no need to turn the volume up in noisy environments.

The source of the most problems in durability, the plug, seems solid and fits the iPhone jack perfectly. I had a minor issue with it at first: the headphone jack of my iPhone had a chunk of lint inside it that prevented the microphone and the play/pause button from working. After removing the lint all was okay.

The weight of these things is noticeable. I actually first thought that they weight as much as my iPod nano. In reality, they weight 22 grams while the iPod weights 37 grams.

I have read that the Vibe II has a bass-heavy sound signature. Maybe so, but I can’t complain. I probably wouldn’t mind even heavier bass. Other than that they sound great. I mostly listen to podcasts and audiobooks, so my needs of audio quality are not that high.

In summary I am really satisfied. I will update this review after a longer period of use if anything worthwhile will come up durability-wise. I really hope not.

By the way, I have to say, the V-moda’s website looks really 90’s. With Flash navigation and background music and all! I would not comment on it otherwise, but they keep advertising how fashionable their products are.